About Us / The Team / Chris Templeton 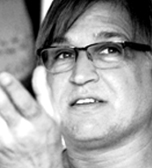 His first writing and directing work was for radio and he secured several commissions from the BBC World Service, broadcasting new and politically charged plays on the ‘Play for the Week’ flagship series. In 1996 he coordinated the UK campaign of death row artist, Manuel Salazar. The campaign secured an 11th hour reprieve from execution with Chris’s campaign documentary ‘Trial and Error’ (broadcast on NBC), provoking an early day motion, signed by 47 MPs in the House of Parliament as well as the attention of Amnesty International.

He is a new media specialist covering multiple business models and has connections with the best talent in the UK TV & new media industry.

He has produced corporate films for: