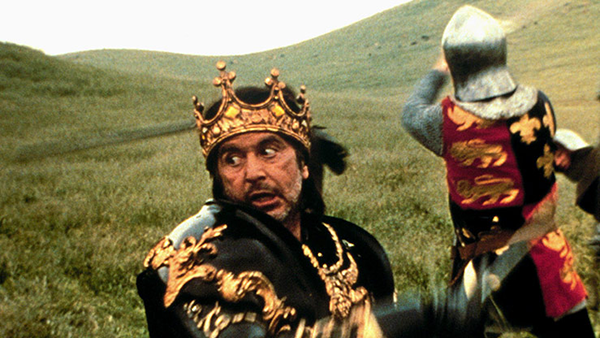 A leadership lesson can come in many shapes. In Al Pacino’s Looking For Richard, where Pacino examines the themes of Richard III, a passing comment from a theatre actor is “If we had learnt anything from Shakespeare, we would say less and mean more…” Simple and powerful advice for anyone, especially those in positions of leadership.

How many of us can say that we actively try to improve our ability to listen? Probably not many. Indeed from childhood onwards far more attention and importance is generally placed upon developing the ability to speak well.

By focusing our attention on the speaker, we naturally afford them and their ideas greater respect. In showing a greater respect for those who are speaking, we engender trust and others are then likely to be more open about their ideas and we stand to gain as a result. Nothing feels as good as being really listened to it would seem. Unsurprisingly, we are generally better in a first date or job interview as the newness of these situations energises our senses and we make a concerted effort to show the best of ourselves which includes good listening. Contrast this with a parental frustration with their non-listening children where the impotent command “Listen..!” usually yields nothing.

Active listening is particularly useful, where nodding your head, maintaining appropriate eye contact, giving small verbal signals(uh huh) and facial expressions all help to build a real dialogue without having to say anything in particular. Active listening entails not only hearing the words the other person says but also registering how they are saying it – volume, pace, tone, modulation, facial expression, posture, gesticulation.

Listening alone is pretty hard though as it is only natural to begin forming one’s own thoughts and opinions in response to what we have just heard and it’s not like we get a choice to switch off that inner monologue. Consequently the biggest challenge is to listen well until the other person has come to a halt, if they ever do. And then, if they spoke at length, as a well intentioned listener we then have to rewind the tape to revisit the salient moments in oder to base our next comment on as full an understanding as possible.

Actors are trained to within an inch of their lives through rehearsals and performance to work moment to moment, placing all their attention outside of themselves and on to their acting partner in a scene, thus reacting within character to whatever external stimuli they are presented with.

Similarly great listening is the stuff of great leadership. Think of the senior people you admire within your organisation. How is their ability to listen? Do they use appropriate eye contact? Do they pause before their turn to speak? Do they use the language that you just did? Do they summarise and reflect back what you were saying before giving their perspective? If so, you are having a conversation with a great listener so make the most of it.

Listening effectively is a quiet (literally) means of building leadership credibility and also, in this noisy world which we inhabit, the most challenging. Yet it remains a seemingly simple and straightforward task.

“If we’d learnt anything from Shakespeare, we would say less and mean more.” High time many more of us put that into practice.